The Chemistry of Light & Color

Did you know that 2019 is the 150th anniversary of the periodic table of elements? In 1869, Russian chemistry professor Dmitri Mendeleev published his version of a periodic table, which gained broad acceptance for two reasons: 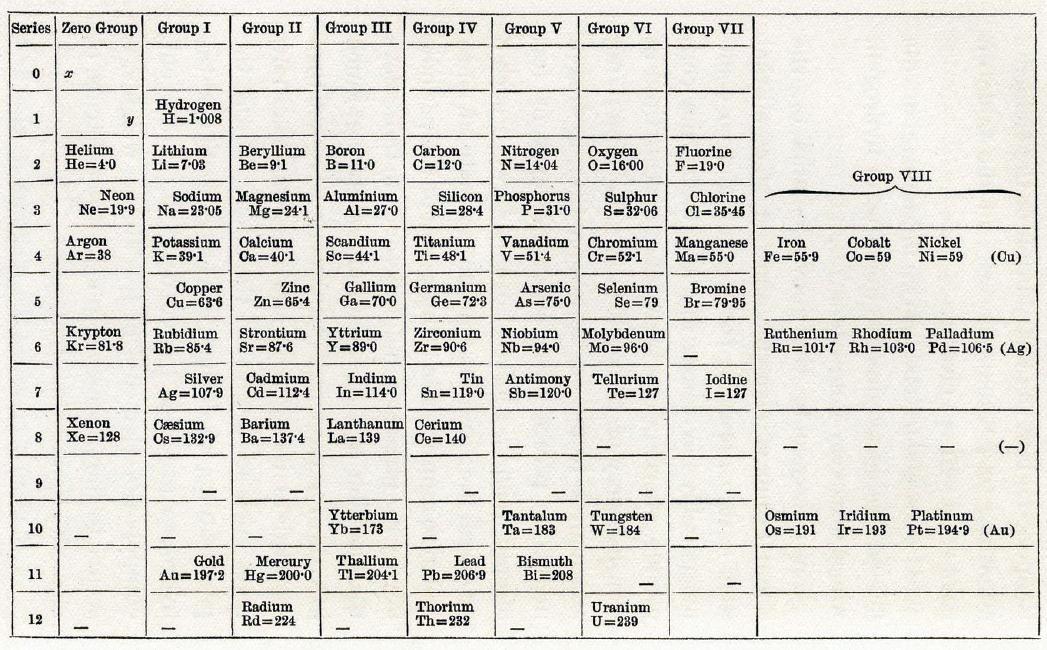 The Appearance of Color

Light (both visible and invisible) is an electromagnetic phenomenon created by the sun’s radiation. Humans perceive color as a result of light interacting with our eyes’ rods, cones, and the other biological elements of our visual system. When light interacts with an object, the physical properties of that object (including its chemical composition) determine how it absorbs, reflects, and/or emits light, affecting how we visually perceive the object.

The corresponding colors of the absorbed wavelengths and the complementary color (what we see). (Image Source: LibreTexts™ Chemistry).

The Color of Chemicals

Many chemicals and chemical compounds appear colorless, since they absorb UV or other wavelengths of light that are not part of the visible spectrum. Chemicals that appear colored absorb wavelengths in the visible spectrum; these colored chemicals are called chromophores. The color we perceive, its brightness and its intensity, depends on the shape of the absorption spectrum of the substance, which derives from the chemical structure of the substance.

The absorption spectrum of the chemical compound chlorophyll a (C55H72MgN4O5). Because it absorbs primarily the violet/blue and orange/red wavelengths, chlorophyll a—the substance that is essential to photosynthesis in plants—appears green to our eyes, giving plants their green hue. (Image Source: NASA)

Just as each substance has its own absorption spectrum, it has a corresponding emission spectrum, which is the exact inverse. While absorption is caused by excitation of the electrons that moves them from a lower to a higher energy level, emission is caused by the electrons falling back down to a lower energy state (“relaxation”), which releases a photon—a unit of electromagnetic radiation. Travelling at various wavelengths, the released photons create a signature for every substance, which can be expressed in terms of the visible spectrum – that is, in a kind of color map.

Scientists have a method for determining the signature of a substance in order to evaluate its elemental makeup. When the emitted light from a substance is passed through a prism, it is diffracted into its individual frequencies, creating a signature pattern of colored lines, called the atomic emission spectrum, which is unique to each element. By looking at a substance’s signature (atomic emission spectrum), it's possible to determine which elements are present.

Luminescence—also referred to as cold-body radiation—describes the emission of visible light by a substance due to electron excitation and photon release. Excitation is most often as the result of the absorption of light, although other stimuli such as chemical reactions, physical agitation, or an electrical current can also lead to the emission of photons. Some substances emit visible light only after they have been exposed to light to excite their atoms; others, such as phosphorous (P), glow as a result of chemiluminescence: the chemical reaction that occurs when phosphorus comes in contact with oxygen (O).

Gaseous elements can emit light when they are heated or with the application of electrical energy to excite their atoms. The latter excitation method is how neon signs are created (technically a misnomer, since they don’t all contain neon gas). Glass tubes containing different gases are used to create a variety of colors, for example: helium (He) glows pink, neon (Ne) produces red-orange light, argon (Ar) is blue, krypton (Kr) is pale green, and xenon (Xe) glows pale blue.

A multi-hued neon sign: glass tubes bent into shapes, filled with various gasses to which electrical current it applied to excite the electrons and produce a steady glow.

The Chemistry of LEDs

LEDs (light emitting diodes) make use of the chemical and electromagnetic properties of light and color. LEDs are made from semiconductor materials—materials that conduct electricity under certain conditions. Elements found in the center of the periodic table are normally insulators that impede the flow of electrical current, but a chemical process called “doping” (mixing in other materials) turns them into semi-conductors.

For example, silicon (Si) is normally an insulator, but the addition of a few atoms of the element antimony (Sb) increases the number of free electrons to create an “n-type” (negative-type) semiconductor. In the same way, if atoms of boron (B) are added to silicon, they effectively take away electrons from the silicon leaving behind "holes" where electrons should be. This type of silicon is called p-type (positive type) because the holes carry a positive electric charge; the holes can also move around.

Typically LED semiconductors use gallium (Ga)-based materials—for example gallium nitride (GaN) or gallium phosphide (GaPO4). The color of light emitted by an LED is determined by the material used. LEDs are composed of two layers of semiconducting material that are doped to create an n-type and p-type layer. When electrical current is applied, the electrons in the n-type layer and the electron holes in the p-type layer are both driven to an active layer (or conduction layer) sandwiched between the two semiconductor layers. The free electrons then fit into the holes, releasing energy in the form of photons or visible light.

Simplified schematic of an LED. (Image courtesy of www.ucusa.org)

The energy difference between the n-type and p-type layer is called the band gap. The size of the band gap determines the color produced by the LED. The larger the band gap, the shorter the wavelength of light produced. So, for a red LED (red has a long wavelength), only a small band gap is required. For blue LEDs, a larger band gap is needed.

It is easier to produce LEDs with smaller band gaps, so it took some time for developers to find the right chemical mix of materials to create the large band gap needed for blue LEDs. Blue LEDs were finally created in the 1990s using gallium nitride (learn more about blue light and blue LEDs). This milestone enabled color mixing for LED-based electronics like lights and displays since all three colors of LED (red, green, and blue) are needed to produce a range of colors including white light.

Radiant Vision Systems develops integrated solutions for both R&D and production-line measurement of intensity, illuminance, luminance, and chromaticity of various lighting sources, including LEDs, LED arrays & display modules, LED light strips, and more. Learn more about our solutions for LED and lighting measurement using our ProMetric® line of scientific-grade imaging photometers and colorimeters. To understand the considerations for selecting the best method of LED and light source testing, read our white paper “Choosing a Measurement System for LED Sources, Luminaires, and Displays.”