The E-Paper Revolution Has Begun

If you own a Kindle, Nook, or other e-reader, if you’ve shopped in one of 240 U.S. Best Buy locations, or been in traffic in Sydney, Australia, then you’ve undoubtedly seen electronic paper (e-paper) displays—even if you didn’t know it. In the last five years, e-paper technology has been popping up everywhere, as displays and digital signage become more ubiquitous. In fact, the global e-paper display market is currently at US$ 620 million annual revenues, and is projected to reach US$ 1.11 billion by 2024, growing at a CAGR 0f 10.2%.1

E-paper is also referred to electronic ink, e-ink (a generic version of leading brand name E-Ink), or EPD—an acronym for electrophoretic display, meaning that it uses tiny, dispersed particles of ink in fluid that move in response to electrical signals. All these terms refer to essentially the same thing: technology that mimics the appearance of ink printed on paper. 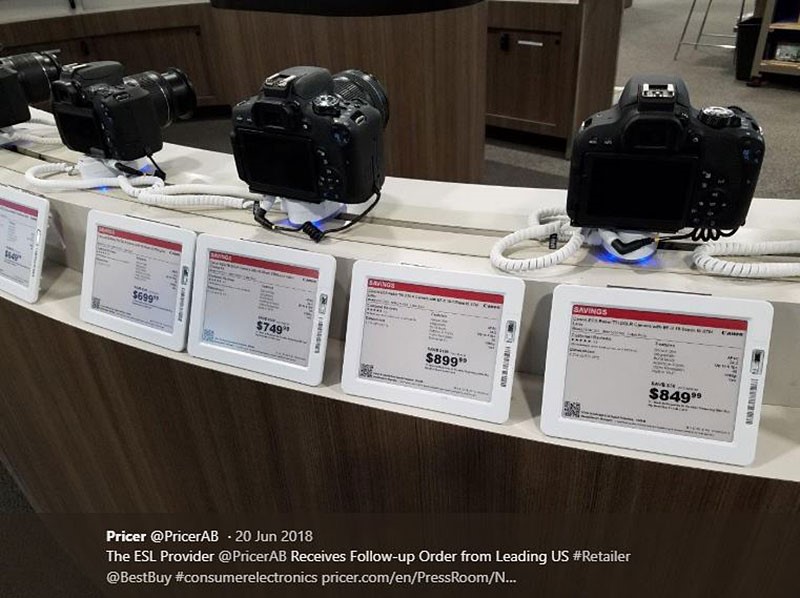 E-paper displays at Best Buy, showing price and other product information, which can be updated dynamically. Displays shown are by Pricer. (Image Source)

At present, e-paper displays are used most widely in e-readers and in the booming Electronic Shelf Label (ESL) segment. Retail stores have to dedicate untold hours of employee time to print, stick, and replace traditional paper labels on store shelves for every single product and SKU. Installing miniature e-paper display labels allows dynamic pricing and frees up employees to focus on helping customers. Bauhaus, the European equivalent to Home Depot, has adopted ESLs, as described in this case study. They report a reduction in price errors, increased agility for sales and markdowns, and improvements in employee morale and customer service.

Easy price changes are perhaps the “killer app” for ESL. For example, some grocers report “spending upwards of $10 million a year changing prices. To put it in perspective, staff tasked with changing price tags are often on the more senior level, making them some of the most expensive labor in the store. For retailers changing 5,000 to 12,000 tags a week, the labor costs really adds up.”2 Barcode and QR code readers also function effectively with e-paper displays—much better than they do with LCD displays.

Why is e-paper being used in these display applications in place of traditional LCD or other flat panel displays? E-paper displays offer multiple advantages:

Readability. E-paper can be seen equally well in sunlight and bright ambient conditions—in fact, it is clearest in bright sun when it reflects the abundant light. The human eye is optimized to receive and interpret reflected light, not glowing screens, thus this facet of e-paper has made it the technology of choice for e-readers. Because they work by reflected light, e-paper displays can also be seen clearly from almost a full 180-degree viewing angle.

E-paper is also easier on the eyes. Unlike traditional backlit displays, there is no “flicker” that can cause eye fatigue. Additionally, the screens are not covered with shiny glass or film that might cause glare, which adds to the work a user’s eye must do to correctly interpret images.

No glow. Unlike traditional backlit displays or newer emissive displays, there is no light being projected out of the screen, no bright glow keeping your partner awake while you read in bed, and no blue LED light that can interfere with sleep cycles.

Energy efficient. E-paper displays use just 1% of the power of LCD displays.3 This efficiency means that small displays like shelf labels can theoretically last for years. A typical ESL uses just 0.012 milliampere hour (mAh) per day, or around 3.65 mAh per year. A typical coin-cell battery has stated capacity of 220 mAh, promising a very long life for each label.4

Having such low power demands also enable even large e-paper installations to be placed virtually anywhere, running on solar power with no connection to a wired electricity source. For example, in Australia, “…the capital of New South Wales can now boast 100% self-sustainable traffic signs that are powered by solar energy, a natural resource that Australia has in abundance.”5 Additionally, after four years in use, Australia’s e-paper signs had a 0% failure rate,6 demonstrating the durability of the technology.

Bistable technology. E-paper displays are so energy efficient because they use what’s called “bistable” (or “bi-stable”) technology, meaning the system flip-flops between just two stable states. In the case of e-paper, each individual ink capsule contains both black (negatively charged) and white (positively charged) particles. Applying positive charge to the top of a capsule repels the white particles and draws the black particles into view, and visa-versa.

Once moved into position, the capsules that make up a display image (such as a white background with black lettering) will remain in their static state, without using any energy. Electricity is only needed to cause the particles to move; then, even if the power source of an e-paper display is removed entirely, the new image will remain visible on screen indefinitely.

E-paper is also thin and flexible, lending itself to new applications in curved and foldable displays. However, e-paper displays don’t excel in every area. Because they don’t have a backlight, they are harder to read in dim light conditions. They don’t provide the same visual capabilities of an LCD or OLED display. Even though there are now some color e-paper options on the market which go beyond the original black and white versions, e-paper still doesn’t come anywhere close to the vivid colors and wide gamut of lit displays. E-paper displays can’t display video content, whereas LCDs, LEDs, and OLED-based screens can. The latter displays also refresh faster and are more responsive to touch, delivering a more dynamic and vibrant viewer and user experience. In other words, we’re not likely to see e-paper smartphones or televisions any time soon.

From Black & White to Color

As mentioned above, early e-paper and e-ink technologies offered just black and white images, which was sufficient for reading and conveying information. This limitation was due in part to having just binary negatively/positively charged particle options. Three-color e-paper has been introduced more recently—for example, E-Ink developed a split charge technique to enable three colors, and you can now readily buy three-color display labels from vendors like Pervasive Displays.

Adding more than just a single color, however, has proved more challenging. One technique tried was introducing an RGBW filter above the particle layer. Companies like E-Ink, Qualcomm ( who experimented with graphene membranes), ClearInk, and others have color display solutions in development, but these products haven’t reached mass-market commercialization yet.7

In addition to electronic ink (electrophoretic) displays, there are some other e-paper technologies being explored, including electrowetting displays (EWDs), interferometric modulator display (IMODs), and electrofluidic display (EFDs). Time will tell which types ultimately rise to the top and can be turned into successful products.

In addition to e-readers and ESLs, a rising use of e-paper displays has been for indoor signage, for example, at event venues, hospitals, and hotels. They are lightweight, battery powered, can be mounted virtually anywhere, moved around easily, and integrated with calendaring systems to update automatically. Other new e-paper applications being tried include:

Just as with any other type of display technology, the history of e-paper includes many R&D, quality, and production challenges. Development of color e-paper displays has been particularly difficult, with many more colors of particles to manage simultaneously. E-Paper displays are controlled at the individual “pixel” level (where each pixel is a single capsule of colored particles with the circumference of a human hair).

Radiant’s display measurement technology is capable of very high-resolution imaging down to the pixel- and sub-pixel level to detect differences in luminance (for backlit or emissive displays), areas of non-uniformity, and blemishes (mura). The same photometry-based technology that enables our automated visual inspection systems to mimic the sensitivity of the human eye to light and color enables us to detect minute variations in both lit and non-lit/reflective surfaces, such as e-paper displays. ;

Whether you’re inspecting black and white or color displays, Radiant’s ProMetric® Imaging Photometers and Colorimeters, used in combination with our TrueTest™ Software with its extensive library of analysis tools, is a powerful solution for both lab use and on the production line.