Lighting Up the Season

Do your childhood holiday memories include untangling long strings of tiny lights and going through a laborious process of elimination to identify that one burned-out bulb that was causing the whole string to malfunction? Well, lighting technology advances have solved that problem with long-lasting (10 year+) LED bulbs and strings that stay lit even if one bulb goes out.

Even though the practice of decorating trees and buildings with light strings originated with Christmas celebrations in the 19th and 20th century, light strings are not just for Yuletide. Referred to in some places as twinkle lights, fairy lights, mini lights, or Italian lights, light strings now decorate public venues, event spaces, weddings, and festivals around the globe at all times of year.

The History of Holiday Lights

The first holiday lights were candles, used in 18th century Germany to decorate trees that had been a part of Christmas celebrations since the 1600s.1 Christmas trees were then adopted in 19th century England, introduced by the German Prince Albert, Queen Victoria’s husband.2 From there, the practice spread to North America, Australia, and elsewhere.

Initially, candles were attached to tree branches with melted wax and/or pins. Trees lit with candles may be lovely to look at but can also be a fire hazard. The introduction of candle clips made decorating the tree a bit easier, but not any safer. Friends of mine who grew up in Germany in the 1960s also recount finding drops of red wax all over their presents, which had been placed under a traditional tree lit with candles. 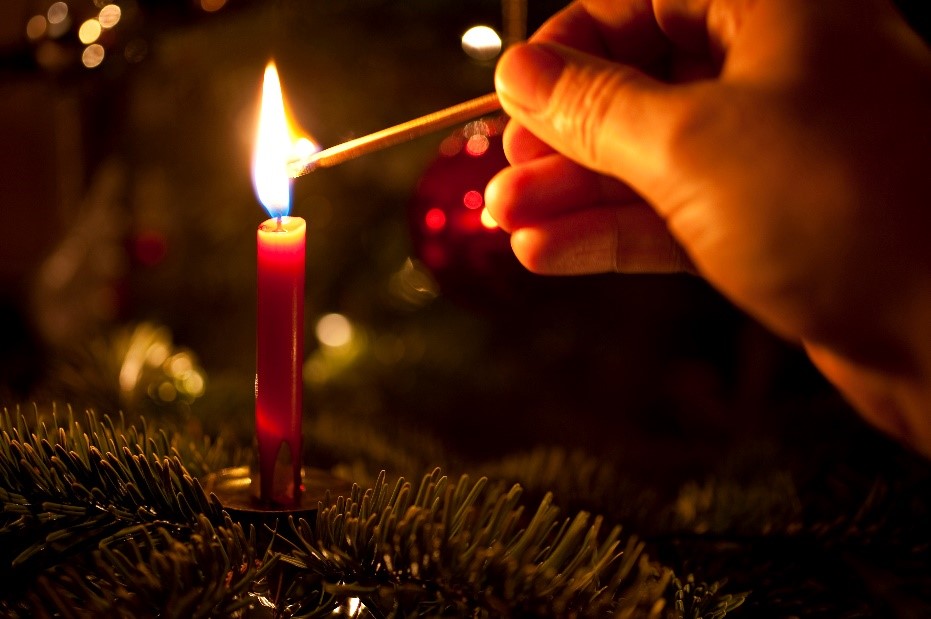 With the spread of electric lighting in the 1800’s, the first tree illuminated by electric lights appeared in New York City in 1882. Edward H. Johnson, an associate of Thomas Edison, had a string of 80 red, white, and blue bulbs specially made and put them proudly on display on a tree in the front window of his townhome, on a revolving pedestal. He powered the display with a generator—quite an incredible sight for the time, as it would still be decades before electricity was routinely available in ordinary homes.

Once Grover Cleveland had the first tree with electric lights put up in the White House in 1895, the idea started to catch on—but primarily among the wealthy. The lights were quite expensive: $12 (about $350 today) for “a string of 16 vaguely flame-shaped bulbs sitting in brass sockets the size of shot glasses.”3 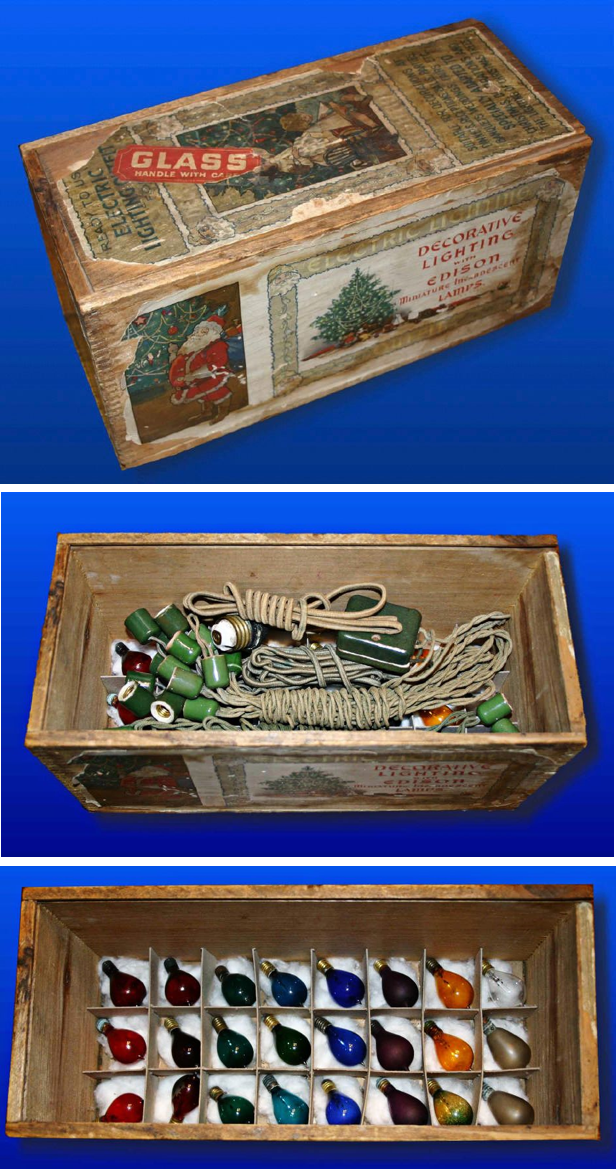 An early set of Christmas lights offered to the public circa 1903-4;, the crate (top), wiring (middle), and bulbs (bottom). (Images: The Antique Christmas Lights Museum).

Blinking lights were introduced in the 1920s, which used a simple thermostat mechanism: as electricity heated a strip of metal inside the bulb, it bent, and broke the circuit. With the light out, the metal cooled, then it bent backwards reestablishing the circuit to create the intermittent blinking light strings. This method is still used today in many red-tipped blinker bulbs.4

By the 1930s, the practice of decorating with colored bulbs had become more affordable and widespread in the U.S., continuing to gain popularity ever since, and spreading to countries around the globe. In the 1970s, miniature lights were was introduced, which quickly caught on for their brightness, low cost, and lower energy usage than older style bulbs. They’ve dominated the decorative light market ever since.

Today, more than 150 million light sets are sold nationwide each year, lighting more than 80 million U.S. homes and consuming up to 6% of the country’s electrical load for December (as of 2016).3 In fact, NASA reports that astronauts and satellite imaging have long been able to see Christmas lights around the world from space, discernable as changes in the intensity of light patterns on earth.5 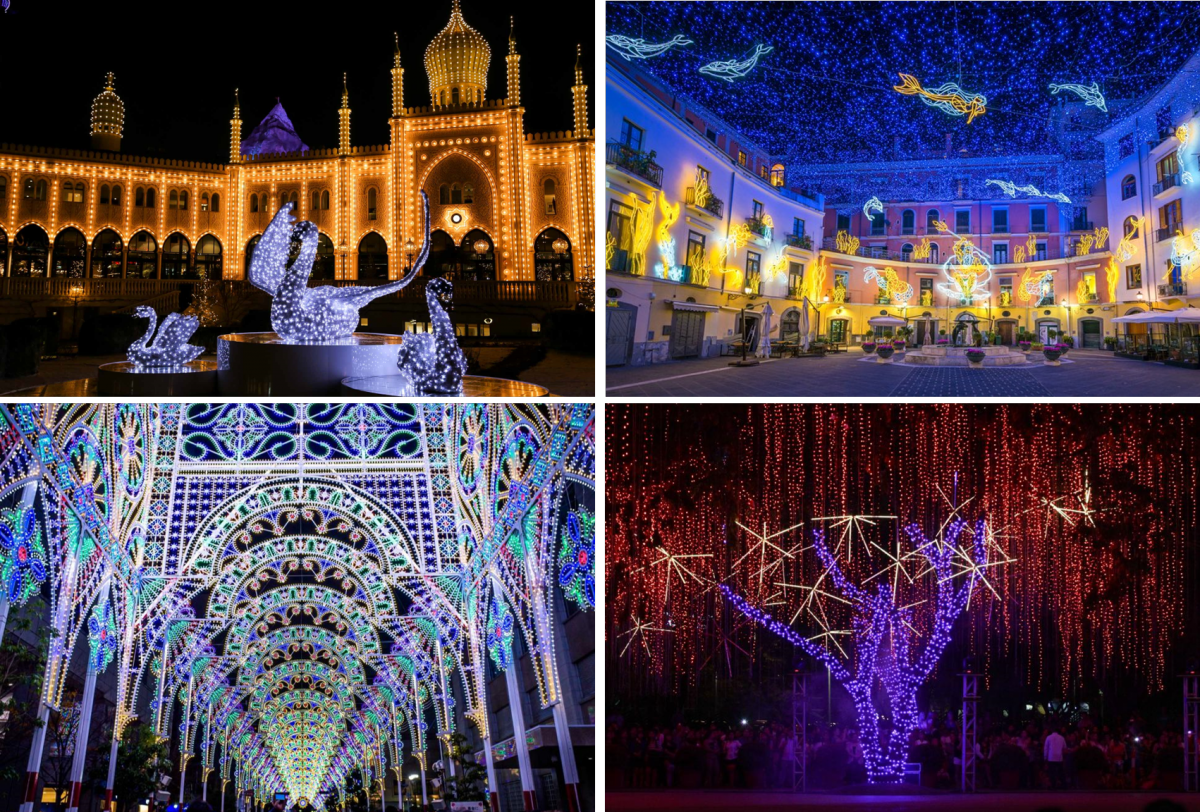 Light displays from around the globe (clockwise from top left): Tivoli Gardens in Copenhagen, Denmark; the town of Salerno, Italy; at the Ayala Triangle Gardens in Manila, Philippines; and in Tokyo, Japan. (Images: Getty)

In the first century after their introduction, most light strings used incandescent white illuminating elements inside glass bulbs that were coated with translucent paints to create the different bulb colors. That didn’t change until the 1990s, when LED holiday lights first appeared.

LED lights have gained rapid popularity due to their energy efficiency—some LED colors consume about 8x less power than incandescent bulbs—and longer life span. Even though they may cost a bit more up front for holiday LEDs, the long-term savings on electric bills has driven widespread adoption. In fact, some power companies (e.g., ComEd in the Chicago area) have offered holiday light exchange programs to incent consumers to make the switch to LED. You can calculate your own estimated holiday light energy usage here for incandescent vs. LED bulbs.

Beyond energy efficiency, perhaps equally exciting to the Clark Griswolds out there, are the many ways LED lighting has opened the door to new and creative lighting approaches.

Your Very Own Light Show

Along with LEDs, the 1990s also saw the emergence of computer-controlled lighting systems. Modern systems use software and wireless networks to allow people to create elaborate lighting displays coordinated with music.

One of the earliest and most famous examples of a home holiday light extravaganza was created in 2004 by Carson Williams at his home in Mason, Ohio, using 16,000 lights coordinated on 88 separate channels, set to music by Trans-Siberian Orchestra.

Today, you can take your pick of technologies to create various lighting effects. For example, high-end gadget retailer Hammacher Schlemmer offers fiber-optic tree lights to create a dancing display of white and multi-colored lights. To cut your energy use even further than with standard LEDs, you can instead choose solar powered lights.

Combining old fashioned light strings with LEDs, light-up display elements, programmable lights you control with an app on your phone, laser projectors, LED light strips, and some imagination, almost anyone can now turn their front yard into a nearly professional-grade light and sound show.

Radiant wishes you and yours the very best for the holiday season and in the New Year. We’ll be back with fresh blog posts in January—see you in 2020!