What Will 5G Mean for Displays and AR/VR Devices?

Technology industry prognosticators have been saying that 2020 will be a big year for 5G networks. It looks like they’re right, as a flurry of rollouts have taken place around the globe, starting with a handful of high-profile (if limited) carrier launches in 2019, and more coming almost weekly. Mobile industry organization GSMA reports that 5G is now live in 24 markets worldwide and predicts that 20% of global connections will be on 5G by 2025.1 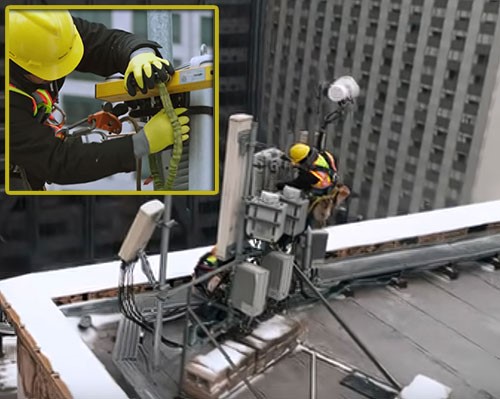 Tower technicians make final antenna alignments prior to Sprint’s 5G testing in Chicago in February 2019, an early milestone for the commercialization of 5G using 2.5 GHz and Massive MIMO. A speed test at the time showed 422 Mbps. (Image: © Wireless Estimator)

5G networks are expected to improve internet reliability and speed: average download speeds of around 1GBps are expected to be the norm.3 “One important benefit of the technology is its ability to greatly reduce latency, or the time it takes for devices to communicate with one another. That will be important for the compatibility of next-generation devices like robots, self-driving cars and drones.”3 These devices are dynamic—they move in real time in the real landscape—so millisecond response time is critical for being able to operate safely, respond to external stimuli, and avoid colliding with other moving objects.

The Potential of 5G

The anticipation for 5G has been building for several years across multiple industries because of its potential widespread impact: it will expand the universe of IoT and provide the infrastructure needed to carry huge amounts of data, which will enable connectivity that hasn’t existed before. “5G will enable billions of new connections with speed and security. It will connect everything to everything (X2X), acting as a critical enabler for Massive IoT, Connected Autonomous Vehicles (CAVs), remote critical control and more. Cars will be connected to the roads and cities they navigate, doctors connected to the medical devices of their patients, and physical infrastructure and assets connected to those tasked with maintaining and managing them.”4

For example, 5G could enable people to enjoy console-quality streaming game services wherever they are, even without Wi-Fi. Travelers could download a movie in seconds before boarding an airplane, and sports fans could achieve fast network and even phone connectivity within a packed stadium.

Beyond entertainment, 5G networks could enable real-time, remote biometric authentication to enhance data security. 5G could also advance applications of ICT Agriculture (information and communication technology in agriculture).5 Medical professionals using 5G devices could diagnose and start directing treatment for patients while they are still in an ambulance on their way to the hospital.6

With large swaths of the global population now transitioning to working and staying at home in response to the current Coronavirus (COVID-19) pandemic, telecommunications providers are hurrying to roll out and expand 5G networks sooner than scheduled. For example:

5G and the Display Industry

The potential impact of 5G on daily life could be huge as more and more devices, equipment, systems, and vehicles take advantage of its capabilities. However, the impact on the display screens embedded in these devices may be blunted. Display technologies like OLED, microLED, quantum dot and others are already increasing screen resolution and picture quality—although perhaps not enough.

Next-generation 5G-enabled TVs could theoretically stream images with several times more pixels than today’s HD or even 4K TVs can replicate. Some analysts suspect that “while some early adopters will pay a premium price for sets that can display [the images enabled by 5G], extreme levels of definition exceed most people’s visual acuity, so viewers will see little reason to upgrade”7 their display devices.

On the other hand, some experts suggest that 5G will help propel the market for 8K television screens using OLED, microLED, QLED and/or other display technologies.8

In the smartphone market, 5G is already driving the design and release of new phone models from major brands like Samsung and Motorola. 5G’s ability to enhance signal strength and speed, even when a user is in a crowded environment surrounded by other users, is one of the big draws for consumers.

Dramatically faster streaming video is another draw for smartphone consumers. Video represents 64% of the roughly 27 exabytes (1 exabyte = 1 million terabytes) of data traffic per month currently, according to Ericsson,9 and is expected to be 74% of the worldwide total traffic of 136 exabytes by 2024.9 And with the enhanced ability to stream video and console-quality gaming content, users are going to expect a highly responsive, high-res screen to match.

The increased bandwidth of 5G is poised to give augmented-, virtual- and mixed-reality (collectively “XR”) devices and applications a boost. The enhanced speed and performance of 5G could be “transformational” for AR in particular, speeding its adoption into the mainstream market.10

AR applications are typically very data intensive: AR devices often have powerful processors, high-resolution cameras, a range of sensors, plus software running concurrently to deliver a real-time experience. 4G networks don’t have the capacity or the low latency to support this data load, which means that, currently, many AR applications are “localized” with a significant portion of processing handled within the hardware device.

Increased network capabilities will also give “developers a larger canvas on which to design new experiences,”11 leading to more sophisticated and expansive AR applications integrated with the user’s environment. For example, AR-enhanced live events could be transmitted in real time, and AR experiences could incorporate more haptic feedback to create a new “Tactile Internet.”.11

Concept image of the Vive Photon prototype from HTC, an MR headset still under development, which is planned to use 5G (although the details are still being worked out). As HTC CEO Yves Maitre says: “It’s not reasonable to have a 5G antenna near the brain of customers”11 so the company is looking at options such as connecting to the network via an externa pack or the user’s phone. (Image © HTC Corporation/Vive)

To produce the high-performing devices of the 5G era, manufacturers of televisions, phones, AR/VR headsets, and other display devices will require rigorous quality control. Radiant’s ProMetric® Imaging Photometers and Colorimeters provide high-resolution, precision measurement for the backlit and emissive displays of both today and tomorrow.

For OLED, microLED, and other emissive display types, our systems measure at the pixel and subpixel level to detect and correct defects like insufficient brightness, inconsistent color output, and dead or stuck-on pixels. For XR devices like visors and smart glasses, our AR/VR Lens and TT-ARVR™ software offer a solution for lab and production display testing across a full, immersive field of view as seen through the headset—up to 120° horizontal, 80° vertical in a single measurement image. Our scientific and in-line metrology solutions ensure devices are designed and produced to meet manufacturer specifications for brightness, color, contrast, uniformity, clarity or sharpness, focus, and objective visual quality.

As the display industry continues to evolve in response to both consumer demand and technology advancements, Radiant solutions are engineered to measure new visual performance requirements and help you achieve your manufacturing objectives.