Enterprise AR On the Rise for Industrial Applications

Use of augmented reality (AR) technology is expected to boom in the coming decades. Leading the way in AR adoption is the industrial sector, which includes manufacturing, engineering, electronics, automotive, aerospace, and other verticals with heavy physical components. A leading pioneer in the race toward the Internet of Things, PTC says of the digital landscape in industry: “Facing increasingly complex and digital processes and products, coupled with an acute skilled labor shortage, industrial enterprises are bridging the gap with the help of AR technology.”1

ARtillery Research, publisher of expert market analysis on the AR/VR industry, projects that by 2021 the global market for enterprise AR applications will be more than $35.2 billion dollars.2 This market growth is fueled by AR adoption in enterprise applications across industries, including training, logistics, assembly, maintenance & repair, product design, and more.

What makes AR such a compelling technology for a wide range of industries is its ability to overlay information (whether text, digital characters, images, or diagrams) on the real environment—literally augmenting what the user sees, adding valuable information in real time. 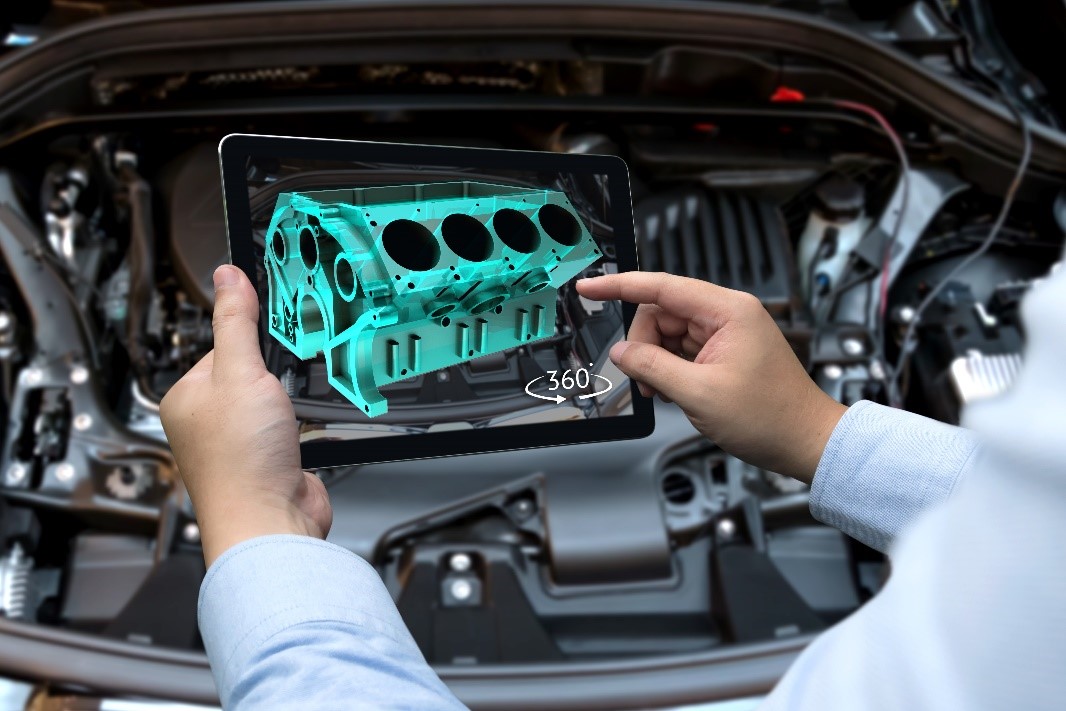 Augmented reality image on a tablet of an engine block, as overlaid on an actual automobile engine.

There are multiple use cases for industrial AR that are driving its adoption across many different functions in the enterprise, from product design, to worker training, to marketing, with adoption in some areas already close to 20% of companies.1

Beneficiaries of AR technology across the enterprise, based on a recent survey by PTC. (Image Source: PCT report The State of Augmented Reality 20191)

Some of the most compelling applications of AR technology include:

Training – For work that requires use of equipment and tools, classroom training has limited effectiveness. Companies have found that shadowing and hands-on practice is the best way to train, inform, and protect new personnel as they learn and work in a live environment. AR can provide employees with information and guidance on safety and procedures for tasks with which they are unfamiliar. In fact, step-by-step training is often the first content that companies start to develop using AR.

For example, the U.S. Military has begun testing with a customized training version of the Microsoft HoloLens®, called the HoloLens 2, or Integrated Visual Augmentation System (IVAS) in the military’s terminology. It includes AR features such as map projections, night vision, and reticule (guidance lines) for weapon aiming. It also monitors a soldier’s heart rate, what they have seen, and their performance for later review in training.

Logistics – Order fulfillment and warehouse operations require a mix of physical work (handling packages or inventory) and digital tasks (tracking, checking goods in and out, shipping data). Using AR technologies, workers can tap into a system that quickly provides information about an item’s location, history, and where it needs to go.  Shipping and freight company DHL is already testing mobile AR systems for this purpose.

Assembly – Assembly line operations are typically characterized by their speed and ability to process high product volume, but can also be subject to errors and defects. General Electric has applied AR technology to business areas including aviation, renewable energy, and healthcare to reduce errors on its production lines. The result: lower costs and improved efficiency.

Likewise, aircraft manufacturer Boeing uses AR glasses powered by Upskill’s Skylight AR platform to guide technicians as they perform the complex wiring on planes. The device and app together help technicians to identify and accurately connect hundreds of wires using only sight and voice control. The system has enabled Boeing to cut production time by 25% and lower error rates to nearly zero.

Maintenance, Repairs and Customer Support – AR systems can enable field technicians to access equipment schematics and troubleshooting protocols when working on site. These resources can even be offered to customers for remote self-servicing. For example, vacuum pump manufacturer Leybold has partnered with REFLEKT to create a maintenance application that allows customers to explore features and components of a system using an iPad® and HoloLens. There is a feature that allows technicians to view a pump in “X-ray vision” mode to see inside the equipment without having to disassemble it.

Design & Development – Using virtual and augmented reality as an extension of CAD systems in product design is a growing trend, helping to speed up the design process, optimize communication between teams, lower development costs, and allow for more in-depth product testing prior to manufacturing. Product developers are finding they can test multiple variations of a product and make tweaks and adjustments in a virtual format instead of having to build physical prototypes for each iteration. AR/VR systems provide detailed visualizations earlier in the design process, and enable virtual prototypes to be tested in the context their real-world environment.

In architecture, augmented reality applications are already proliferating, enabling architects to envision their designs in 3D and “walk through” these digital environments with clients before breaking ground. For example, AR Sketchwalk is a new AR tool that shows how a building will integrate with its landscape.

Architectural AR apps allows users to see a building in 3D and visualize how it will look in its real-world environment while still in the design phase. (Image Credit: AMLGM/Morpholio)

Ensuring the Quality of AR Displays

With more companies coming to rely on AR devices to support key functions, it’s important that the devices themselves are accurate and reliable. Careful hardware testing for head-mounted displays like those in goggles and glasses is critical. Because these displays are typically positioned very close to the eye, even miniscule defects are magnified and can interfere with a user’s view. AR devices also require that any quality testing system can accurately measure projections as viewed through a transparent medium such the glass lens of a headset.

Radiant has developed a solution for testing AR devices, our AR/VR Lens, which replicates the position of the human eye in a device and captures a full 120° horizontal field of view. Paired with a ProMetric Imaging Photometer or Colorimeter and specially developed TT-ARVR™ software test suite, the AR/VR Lens solution is able to objectively measure the quality of AR displays as seen by the human user.