Since the earliest eons of earth’s history, the light of the sun has affected the evolution of most life forms. Plants photosynthesize, birds and animals have established diurnal or nocturnal behavior patterns, even fishes and marine invertebrates are sensitive to light that filters below the ocean’s surface. Humans are no exception. Our circadian cycles govern sleep, wakefulness, and alertness throughout each 24-hour day, and they are profoundly affected by light.

Sleep is critical for good health, promoting healing, fighting infections, regulating insulin, and enabling the formation of memories. Sleep deprivation contributes to unhealthy inflammation, reduced immune response, and diabetes. Additionally, fatigue reduces our ability to learn, think clearly, and make decisions. For example, driving with less than four hours of sleep has the same effect on reflexes and judgement as a blood alcohol level of 0.08.1

The Need for Human-Centric Lighting

Since the industrial revolution, an increasing amount of daily life is conducted indoors—in schools, offices, retail stores, entertainment venues, factories, and homes. Artificial lighting is a constant presence, often replacing the natural daylight cycles that used to regulate our lives. Poorly designed lighting schemes disrupt our circadian rhythms, affecting not only personal health but also broadly impacting productivity and workplace safety. It’s critical to understand how to light our homes, schools, and workplaces to better support human health and wellbeing.

In recent decades, new research into how light affects alertness, mood, sleep patterns, and productivity has coincided with the development of new LED products that can produce finely tuned lighting schemes to achieve optimal intensity (luminance) and color (chromaticity) for the vast range of human activities. The emerging science of Human-Centric Lighting (HCL) is focused on how light affects us and how to design lighting schemes that support and enhance human functions and health.

An ideal 24-hour circadian cycle: morning daylight wakes us up and promotes alertness and functioning through the daylight hours. Sunset and low light in the evening triggers the release of melatonin, which helps our bodies prepare for and optimize sleep. What interferes with this cycle is the intrusion of overly bright lighting in the evening, or a lack of bright light containing blue wavelengths during the daytime.

Rods and cones in our eyes receive light and send signals to our visual cortex—the brain’s image processing center located in the occipital lobe. This system is referred to as our photopic vision. In the past 20 years, researchers have discovered other photosensitive cells in the eye, the retinal ganglion cells (RCGs), also called photosensitive retinal ganglion cells (ipRGCs). Unlike the rods and cones, RCGs send signals to the brain’s hypothalamus region, the location of our circadian “clock.” Among its multiple functions, the hypothalamus controls the release of the hormone melatonin, which regulates sleep cycles. This system is referred to as our melanopic vision.

The science of human-centric lighting is helping us understand how melanopic vision works and how our bodies respond to different qualities of light. One important consideration is the wavelength profile, or spectral power distribution (SPD) of a light source. Our circadian system is triggered by the presence or absence of wavelengths in the cyan/blue range of the spectrum. These wavelengths, which are prevalent in daytime sun, promote alertness, focus, and boost our mood.

Correlated Color Temperature (CCT) is a way to characterize the color appearance of any light source. White light is produced from various combinations of all the colors in the visible spectrum. Different amounts of each wavelength will cause the light to appear “cooler” (more blue/cyan wavelengths) or “warmer” (more amber/red wavelengths).
The CCT of a light source is the point on the black body locus that matches most closely (perceptually) to the chromaticity coordinates of the light—called its color temperature—measured in degrees Kelvin (K). Lower CCT values (e.g., 1800-2700 K) are considered warm tones, neutral white is about 4000 K, and the higher values of 5000 K and above are the coolest CCTs.

Refer to this blog post for further explanation of CCT, the CIE color space, the Planckian (black body) locus, SPD, and related concepts. Additional information can also be found at the Lighting Resource Center of Rensselaer Polytechnic Institute.

The early, basic approach to HCL relies on simply increasing the amount of cool bluish light present in some environments, such as schools and offices, while using warmer amber and reddish wavelengths in places such as restaurants and at home where we spend our evening hours. Incorporating our latest understanding of human melanopic vision has recently led to more sophisticated approaches to design and tune HCL lighting schemes with precision.

For many decades, incandescent light bulbs (left) have enabled us to create warm, melatonin-friendly lighting for our homes and bedrooms with their dominant amber/red wavelengths. However, they are not energy efficient and thus are being widely replaced in favor of LEDs, which can be 75% more energy efficient and last longer. (Image Source: LED Dynamics)

Lighting experts now refer to the “melanopic ratio” (MR), also known as the melanopic/photopic ratio or M/P ratio. The MR ratio enables us to characterize light sources by both their visible light output (photopic) and by how much they stimulate the circadian system (melanopic). The MR ratio goes further than CCT to characterize not only the color temperature but also the functional impact of a light source on humans.

Warmer light bulbs typically have a CCT around 2200 K and a low MR. They emit fewer blue/cyan wavelengths and are better suited for evening relaxation and preparation for sleep. By contrast, light sources with a cool CCT around 6500 K would tend to have a high MR with more blue/cyan, suppressing melatonin production. They could be used in daytime to support alertness and focus for task lighting in schools, factories, offices, control rooms, etc.

For example, consider lighting for an office environment. You want workers to be alert and productive without “over lighting” the space to the point it seems cold or uncomfortably bright to human occupants. To achieve this balance, an average office lighting plan might target approximately 4000K for the overall ambient environment, with areas of higher-CCT light for specific tasks.

Today’s LEDs can be designed to achieve different brightness levels (intensity) and different CCTs to achieve a specific, desired MR. Traditional LEDs often exhibited a "dip" in the cyan wavelength region, but new innovation in the industry has led to the development of specialty LED bulbs that support human circadian function with a precise mix of wavelengths and a boost in the cyan region.

When designing the lighting for any specific environment, architects and designers typically use lux as the key metric for calculating the effect of lighting schemes (lux is the measurement unit of illuminance, which is the amount of light that shines on a surface, in lumens per square meter, lm/m2).

The standard application of of lux has some limitations, however. Traditionally, lux calculations have accounted only for horizontal lux—measuring the amount of light that shines on a flat surface such as a desktop or the floor. An HCL approach also requires that we consider vertical lux—light that shines in the vertical plane and enters the pupil at eye level, which more directly impacts our melanopic response. To design an HCL scheme requires converting horizontal to vertical (melanopic) lux.

Now melanopic lux is replacing lux as a key criterion for HCL lighting, as reflected by industry standards. For example, “the WELL Building Standard (WBS) describes healthful light in units of Equivalent Melanopic Lux (EML). The EML formula is method to quantify the biological (melanopic) effect of lighting on humans. The formula is weighted to emphasize the response of the retinal ganglion cells (ipRPGs), rather than the cones, which is the case with traditional lux.”2

Today’s advanced LEDs are enabling the creation of human-centric lighting designs with greater precision, energy efficiency, and positive impact on human health and productivity. LEDs can now be tailored to produce a wide range of CCTs, supporting the desired MR ratio for multiple lighting applications. 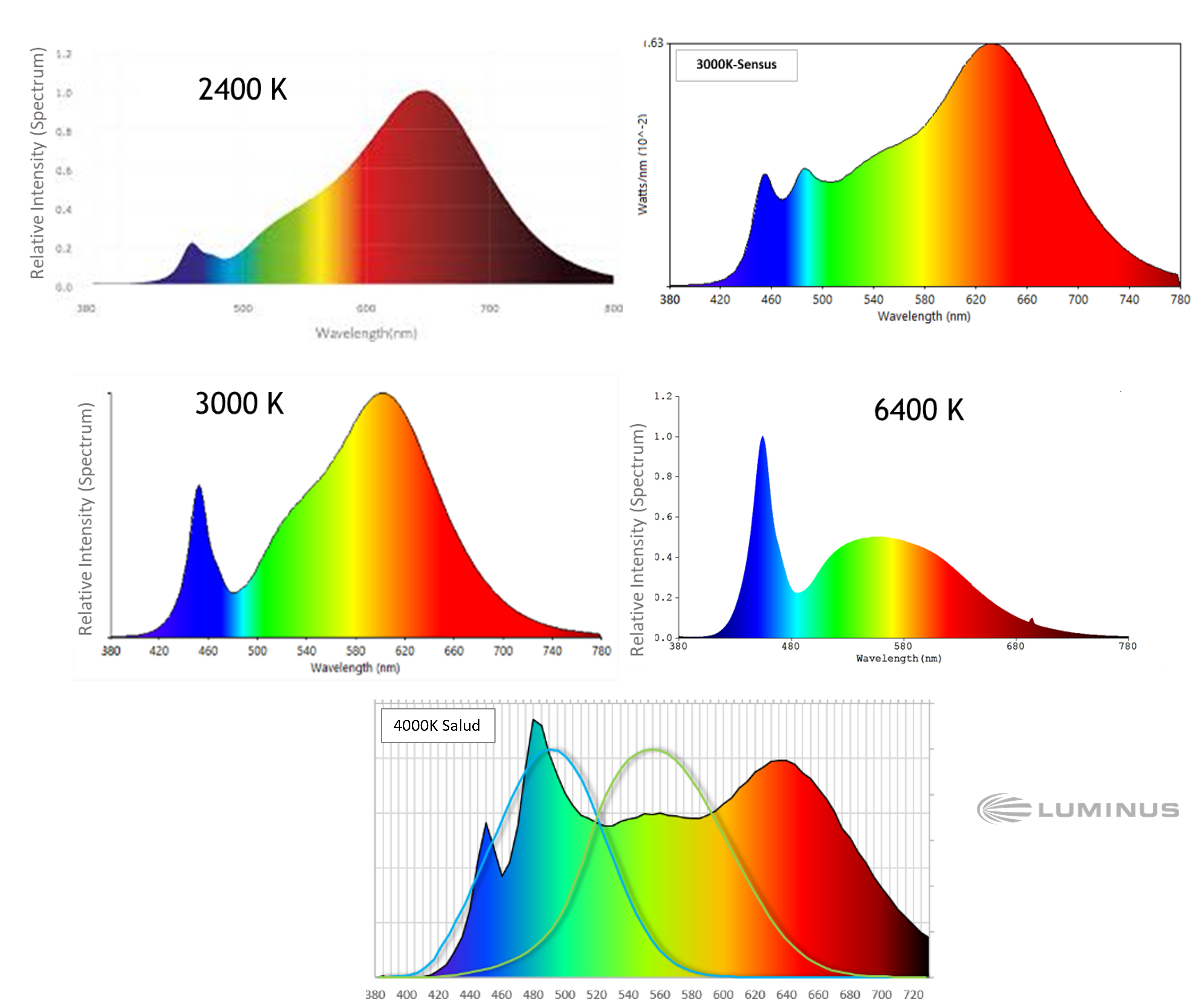 Examples of the SPDs of several LED products engineered to produce specific CCTs. Today’s advanced LEDs can be tailored to support the desired melanopic ratio for a range of different lighting applications and environments. For example, the bottom image is the SPD of an LED designed specifically for daytime HCL with a boost in the cyan region; it's shown with overlay of the melanopic (blue) and photopic (green) curves for reference. (Image © Luminus Devices, Inc., used with permission).

A recent innovation in LED technology is the “tunable” bulb. These lights can be adjusted to provide different CCTs at different times of day. For example, in one experiment in a nursing home, bright blue-white light was provided in the mornings, then adjusted to be warmer in the afternoon, changing to a deeper amber hue with lower intensity in the evening, and finally reducing intensity further just before bedtime. The result was that residents experienced improved sleep quality, slept longer, and showed reduced “agitation.”3

New tunable LED products enable lighting CCT and intensity to be adjusted throughout the day to provide optimal lighting for different times and activities, such as in this nursing home. (Image Source: Pacific Northwest National Laboratory)

In addition to melanopic lux, MR, CCT, and other HCL factors, designers also must consider beam angles, energy efficiency, and more. Each lighting component used—LED bulb or fixture—needs to be carefully considered for how it fits into the entire lighting plan.

An example of a modern, human-centric LED office lighting scheme. It includes recessed ceiling lights to provide an overall diffuse light that creates a bright and comfortable ambiance, and more direct and intense task lighting over desks to help workers focus. (Image Source).

To help both LED manufacturers and lighting design engineers measure and verify the output of lighting components, Radiant offers a range of integrated solutions for both R&D and production-line testing of intensity, illuminance, luminance, dominant wavelength, and CCT of various lighting sources. In R&D environments, compact goniometer systems—which measure light as a factor of angle—pair with imaging technology and application software to deliver fast, cost-effective, and comprehensive data for 3D light modeling.

Our systems enable lighting engineers to optimize their product designs and easily generate standard output files, including IES, EULUMDAT, or Radiant Source Model™ (RSM) formats for use with any major optical design package.
A key step in the production of encapsulated LEDs or LED-based optical assemblies is the alignment of the optics to the LED die. Improper alignment will alter the output of the LED—the angle and intensity of light emitted from it—and will impact the overall performance of the system in which it is used.

On the production line, our ProMetric® Imaging Colorimeter and Photometer solutions and goniometric systems acquire complete luminous intensity data for all output angles from a source LED, enabling designers to define an objective standard for optimal system performance, and to ensure that standard is maintained in production and the end products will meet published MR and CCT specifications.

An example of a goniometer (left) employing an imaging system to measure the complete spatial output of a large light source at a given angle. A measurement image (right) shows the radar plot of a light source’s angular luminous intensity distribution (in false-color scale) and a polar diagram highlighting a cross section of that intensity plot.