In honor of the UN’s International Day of Women and Girls in Science on February 11, 2020, Radiant continues our series on Physics Heroes and Heroines by profiling a few of the many female physicists, mathematicians, and scientists that we admire.

In 1999, physicist Lene Vestergaard Hau slowed a beam of light down to 15 mph (about 17 meters per second), roughly the pace of a bicycle; then in 2001, she stopped a light beam completely. Specifically, she led a team that “stopped and extinguished a light pulse in one part of space, and subsequently revived it in a different location. In the process, the light pulse is converted to a perfect matter copy that can be stored—put on the shelf—sculpted, and then turned back to light. These results represent a new paradigm for information processing.”1 Essentially, they changed light into matter and back again. This work holds important implications for quantum computing and quantum cryptography.2

Dr. Hau is currently the Mallinckrodt Professor of Physics and of Applied Physics at Harvard University. She was born in Denmark, earning her BS, MS, and doctorate at the University of Aarhus. She spent time at CERN, the particle physics laboratory near Geneva, and at the Rowland Institute for Science at Cambridge, Mass.

After moving to Harvard in 1999, she began working on an experimental effort to create a new form of matter knows as a Bose-Einstein condensate (originally predicted by Albert Einstein based on a paper by Satyendra Nath Bose), which led to the light-stopping breakthrough. Since then, she continues to conduct research in electromagnetically induced transparency, quantum physics, photonics, and the development of quantum and nanoscale applications. 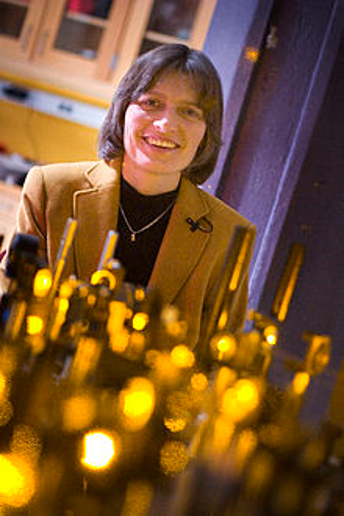 Dr. Lene Hau in her Harvard University laboratory at the laser light optical table that was used to generate light beams of a frequency resonant to a Bose-Einstein condensate, the basis for her experiments that slowed and stopped light. (Image Source)

Nicknamed “the First Lady of Optics”, Dr. Anna Estelle Glancy was a lens designer whose work helped improve the quality of optics for eyeglasses, cameras, telescopes, and military optical instruments.3 Her brilliance in mathematics and lab skills is credited with some of the significant advances in vision correction during the first half of the 20th century.

Born in Waltham, Massachusetts, she attended Wellesley University, then went on to be one of the first two women to earn PhDs in astronomy from U.C. Berkeley in 1913. While largely blocked from pursuing a career in astronomy due to her sex, in 1918 she was an offered an opportunity to work with eminent lens designer Dr. E.D. Tillyer at American Optical, then the largest eyewear company in the nation (now part of Carl Zeiss Vision).

She contributed all the mathematical work to a lens breakthrough for which Dr. Tillyer became famous. The “Tillyer Lens”, which took them 10 years to develop, dramatically improved glasses optics, helping to reduce eyestrain. On her own, Dr. Glancy developed a breakthrough camera lens that enabled photographers to take sharper, clearer pictures. Her research also helped television engineers to create larger screens.4

In 1923, she developed and patented the first progressive lenses, although it would take another quarter century for these to become commercialized and accepted as a superior alternative to bifocals and trifocals. She also developed the first lensometer, a device used to measure the power of spectacle lenses, now a standard piece of equipment in optical dispensaries. An observatory at the Smithsonian National Air and Space Museum is named in her honor.

The President of Rensselaer Polytechnic Institute since 1999, Dr. Jackson was the first African American woman to receive a PhD from the Massachusetts Institute of Technology (MIT)—in any field. While there, she studied particle physics and also led efforts to “open the aperture” for more minorities and women, helping establish Black student organizations and serving on the University’s first Task Force on Educational Opportunity.

She worked at the Fermilab particle accelerator and did a fellowship at CERN before taking a job at Bell Laboratories as a theoretical physicist. Once there, she collaborated on research related to “charge density waves, which describe how electrons organization themselves within layered crystals,”5 and focused on understanding how temperature variations change the patterns and properties of the materials. This research was important for the eventual development of high-temperature superconductors.

She went on to Chair the Nuclear Regulatory Commission and served on the President’s Council of Advisors on Science and Technology from 2009-2017. She was appointed an International Fellow of the Royal Academy of Engineering (FREng), among many honors, awards, and leadership roles bestowed on her.

She describes her scientific interests: “the electronic, optical, magnetic, and transport properties of novel semiconductor systems. Of special interest are the behavior of magnetic polarons in semimagnetic and dilute magnetic semiconductors, and the optical response properties of semiconductor quantum-wells and superlattices. My interests also include quantum dots, mesoscopic systems, and the role of antiferromagnetic fluctuations in correlated 2D electron systems.”6

Computer science pioneer and Rear Admiral in the U.S. Navy, Grace Brewster Murray Hopper was one of the first programmers of the Harvard Mark I computer, the first large-scale “automatic calculator”, which was used to do calculations for the Manhattan Project, among other uses. Born in New York City, Hopper attended Vassar College and went on to earn her PhD in mathematics at Yale University in 1930.

During World War II, after being initially rejected from military service due to her age, low weight, and the value of her mathematics work to the war effort,7 she was able to join the U.S. Naval Reserve in 1943. She worked as part of the Navy team at the Harvard Computation Lab under Howard Aiken throughout and after the War. There is a popular anecdote that Hopper coined the terms “bug” and “debugging” when a moth got into the circuits of the Mark II computer. The moth was real but her responsibility for naming the phenomena may be apocryphal.

In 1949, she joined the Eckert-Mauchly Computer Corporation as part of the team helping to develop UNIVAC I, the first commercial electronic computer released to market in 1950. She developed an operational link-loader (now known as a compiler), which enabled programmers to use English words in place of symbols. She popularized the concept of machine-independent programming languages, leading to the development of the programming language COBOL, which is still in use today. In the 1970s, she advocated that the Defense Department replace its large, centralized computing systems with networks of small, distributed computers to improve security.

Hopper was elected a fellow of the Institute of Electrical and Electronic Engineers (1962), was named the first computer science Man of the Year by the Data Processing Management Association (1969), and received the National Medal of Technology (1991). She was posthumously awarded the Presidential Medal of Freedom in 2016.8