Blue light has been getting some attention in popular news lately regarding the potential negative effects of exposure to humans. The widespread adoption of phosphor-coated white LEDs (which encompass blue light wavelengths) in everyday use has raised concerns and spurred new research. Blue light from LED-based display devices such as smart phones and laptops has sometimes been blamed for retinal damage, insomnia, and even cancer. As a result, “blue blocking” glasses have become a thing—for example, popular brand Warby Parker recently came out with blue-light-filtering lenses.

Drawing the most scrutiny is the short-wavelength blue region of an LED’s spectral power distribution, or the 400-500 nanometer (nm) range, with a peak at around 440 nm. Prolonged/extreme exposure has been tied to age-related macular degeneration.1 However, the risks to an average person are very low. The term “blue light hazard” sounds scary—it refers to phytochemical-induced damage to the retinal tissues—but it’s associated with staring into extremely bright light sources such as the sun or a welding arc for extended periods of time—actions that are easily avoided.

Typical white-light sources (like indoor lamps, including LED lamps) contain blue wavelengths to a greater or lesser proportion depending on whether the light is cool or warm. However, the low luminance of these fixtures makes any potential risk of blue-light injury “negligible.”2 The International Commission on Illumination (CIE) emphasizes that the amount of blue light emitted by typical light sources is small enough that it would become a hazard only if you looked for a prolonged period direction at glaringly bright light. 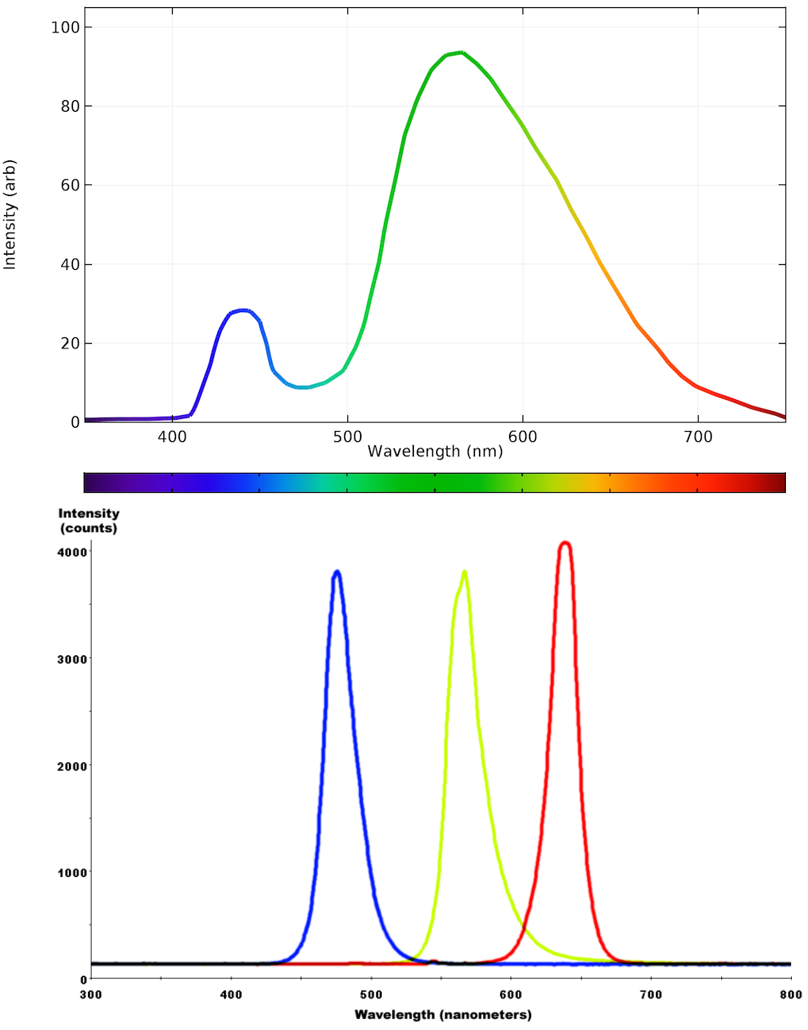 Thus, it appears that normal exposure to interior lighting and illuminated devices is not something to be afraid of. In fact, the American Academy of Ophthalmology says: “There is no evidence that the kind or amount of light coming from computer screens is damaging to the eyes,” and it “does not recommend any special eyewear for computer use.”3 So, working all day at a computer screen may not be the best thing for eyestrain or ergonomics, but the blue light probably isn’t a critical issue you need to worry about.4, 5

The blue-light effect that you do want to watch out for isn’t eye damage—it’s sleep disruption. Blue wavelengths are beneficial to humans during daylight hours: boosting attention, reaction times, and mood. But in the evening and at night, studies6 have shown that blue light exposure can disrupt circadian rhythms by suppressing our body’s release of melatonin (a sleep hormone), which can be further linked to increased risk of certain diseases.

In conclusion, investing in blue-blocking glasses, using blue-light-filtering apps, switching to “night mode” on your smart phone, or simply putting away LED screens for a few hours before bedtime are ways to improve your sleep hygiene. But no need to swear off LED light bulbs and devices altogether. 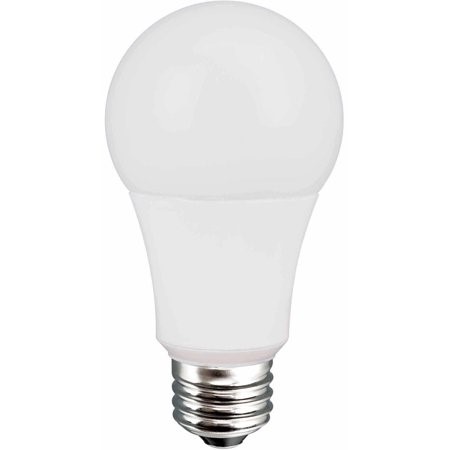 A typical LED light bulb that provides equivalent brightness as a 60-Watt incandescent bulb, with much greater power efficiency and lifespan.

LED light bulbs typically emit more blue wavelengths than other types of bulbs, so they can be a culprit in impacting sleep. But LEDs are much more energy efficient than incandescent or standard CFL (compact fluorescent) lighting, and they convey other benefits. In fact, the invention of blue LEDs was deemed worthy of a Nobel prize. Blue LEDs was were the last—and most difficult—advancement that was required to create white LED light. White LEDs have enabled companies to create smartphones, computer screens, and lighting fixtures that last longer and use less electricity. A typical incandescent bulb converts just 4% of electricity it uses into light, while a modern white LED lightbulb converts more than 50% of electricity into light, and lasts ten times longer.7 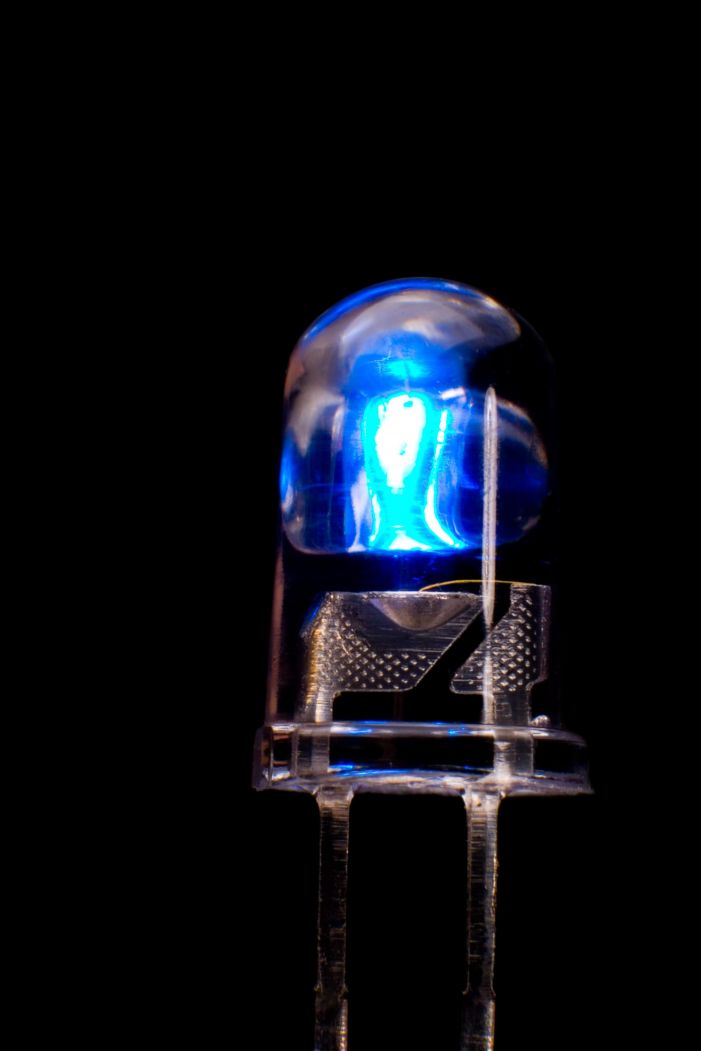 Because LEDs are energy efficient and smaller than the CCFLs (cold compact flourescent lamps) that had previously been used for backlit displays, they’ve made thin flat-screen televisions and devices a reality. Blue LEDs have made possible today’s backlit LCD smartphones, televisions, and computer screens. They are used in Blu-ray players, many lighting fixtures, and in other technology and industrial applications.

Simplified diagram of a typical LCD display screen with white LED backlight passing through the layers.

LEDs (light emitting diodes) are essentially semiconductors, emitting light when they are activated by electromagnetic radiation. Different chemicals give different LEDs their colors. To make an LED, two different semiconductors are fused together, one with extra electrons and one with room available to receive these electrons. When voltage is sent across the diode, the extra electrons move and fall into the holes, releasing energy in the form of light. The earliest diodes could only produce a small amount of energy, which resulted in red light. By the 1970s, LEDs had advanced to the point where scientists could make bright red, yellow, and green light by using different materials for the semiconductor and “doping” (adding various additional elements).

In 1994, Shuji Nakamura of Nichia Corporation developed the first high-brightness LED using indium gallium nitride (InGaN), which won him the 2014 Nobel Prize for Physics. He shared the award with Isamu Akasaki and Hiroshi Amano who had first determined how to use sapphire as a substrate for GaN. Modern blue LEDs use Nakamura’s basic technique with refinements that increase the brightness and efficiency of blue LEDs.

Blue LEDs made it possible to create white-light LED lighting and devices: since white light comprises wavelengths of red, green and blue light (RGB), without blue you can’t have white. The RGB method of creating white light uses one of each color LED, which blend together to appear white.

A more efficient method of producing white light for many of today’s backlit displays is the phosphor method. Instead of using three LEDs in red, green, and blue, a single short-wavelength LED such as blue or ultraviolet can be coated with a layer of yellow phosphor. The combination of blue and yellow photons produces white light.

Ensuring Quality for Blue LEDs (and Other Colors)

With high consumer expectations for the latest display devices and lighting, manufacturers need careful testing and measurement regimens to ensure the performance and appearance of their LED products. Radiant has been working with LED manufactures since our inception helping to test and measure luminance and color, ensure the uniformity of backlit-LED displays, and more. Our systems can evaluate and qualify lighting systems against application-specific requirements for light, color, and illumination output. The ProMetric® family of imaging colorimeters and photometers (scientific light measurement systems) is designed to address both light source metrology for optical designs, as well as to meet the demands for high-volume manufacturing of displays, illuminated keyboards, and LED lighting products.