A View from Inside the Headset: A Lens that "Sees" VR Like We Do

When I was a kid I loved to sit in the 4th or 5th row of a movie theater, dead center. It was far enough back that I didn’t have to crane my neck, but close enough to the screen to minimize any peripheral visual distractions so I could become completely absorbed in the world of the movie. I stood next to Scarlett O’Hara as Atlanta burned, and soared through the night air on a bicycle with ET.

Nowadays, you don’t have to go to a movie theater to have the same kind of immersive experience—you can just put on a virtual reality device. Within the headset, your vision is limited to the images projected on the display screen right in front of your eyes. This type of screen—called a near-eye display (NED)—is used in VR headsets as well as augmented (AR) and mixed (MR) reality devices. A NED projects visual objects and information in close proximity to the eye, sometimes encompassing the your entire angular field of view (FOV).

The proximity of a NED magnifies display projections, helping to create that immersive experience; however, it also enhances defects. What would otherwise be tiny, unnoticeable defects on a big-screen TV viewed from a yard away, become large, glaring imperfections. Defects like non-uniformity, line and pixel defects, poor image clarity, and image positioning issues detract from the user experience. For AR/VR devices, display testing is a critical step for product quality control. To accurately test the quality of NEDs, designers and manufacturers need a measurement solution that replicates the visual scope and perception of the human eye, especially within the unique viewing environment of an AR/VR headset. 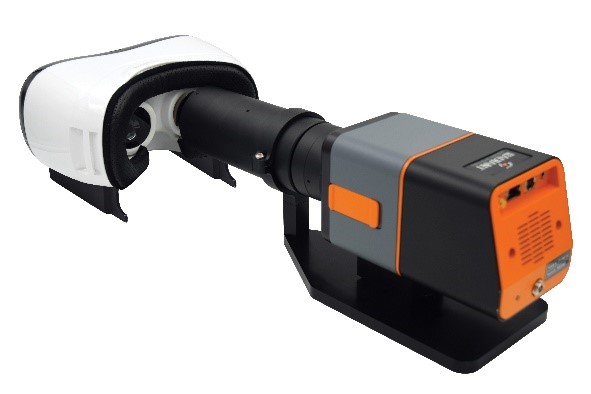 Radiant Vision Systems has a new AR/VR lens that features a unique optical design specially engineered for measuring NEDs, such as those integrated into AR/VR/MR headsets. The lens design simulates the size, position, and FOV of the human eye, allowing the connected measurement system (camera) to “see” exactly what the user sees. In standard lenses, a camera’s aperture is located deep inside the lens, positioning the camera’s “entrance pupil” (where light enters the camera to create images) at a distance from the display. In comparison, the aperture of the Radiant AR/VR lens is located on the front of the lens, positioning the camera’s entrance pupil very close to the display at the same location inside headsets as the human eye.

With the aperture at the front of the AR/VR lens, the connected imaging system can capture the full FOV of the display up to 120° horizontal. This horizontal FOV covers the approximate range of human binocular vision, meaning the lens can capture everything a user would see within a headset without obstruction. Below is an example of how the aperture position enables full-FOV imaging of the display beyond the headset hardware (device entrance aperture).

Paired with a Radiant ProMetric® 16- or 29-megapixel imaging photometer or colorimeter, the AR/VR lens captures high-resolution images of displays for pixel and sub-pixel measurements to detect defects and anomalies in LED, LCD, OLED, and projection displays. Radiant TrueTest™ Software also provides a set of unique display test algorithms for AR/VR display analysis including:

To learn more about the optics and challenges of measuring NED displays, you can view a 30-minute webinar from Radiant’s Applications Engineering Manager, Eric Eisenberg. Learn how Radiant replicates human vision in its AR/VR measurement solutions for the most accurate evaluation of the user experience. Topics of the webinar include: