Global television sales have traditionally spiked during World Cup Years, and 2018 was no exception. In countries around the world— from small-screen TVs to giant, high-definition flat-panel displays; across countries from Ireland to India—sales were up.

Of all the viewers around the world who were glued to the FIFA World Cup action, there was at least one person—Jeff Yurek of Nanosys—whose attention was evenly split between the gameplay and what the players were wearing. Specifically, he was focused on the color of each country’s team uniforms as seen from his TV screen. Did the colors on the screen accurately reflect the colors of each team’s jersey? He decided to perform his own color study and analyze how various FIFA team colors were rendered on (presumably) the most common TV screens used for gameday viewing.

To perform this study, Yurek first had to identify the real-world color of each team’s jersey. Based on “publicly available data and a little math,” he explains how he plotted the colors for the top-10 World Cup countries of 2018 onto the CIE 1931 color space (a graphical representation of all colors visible to the human eye). 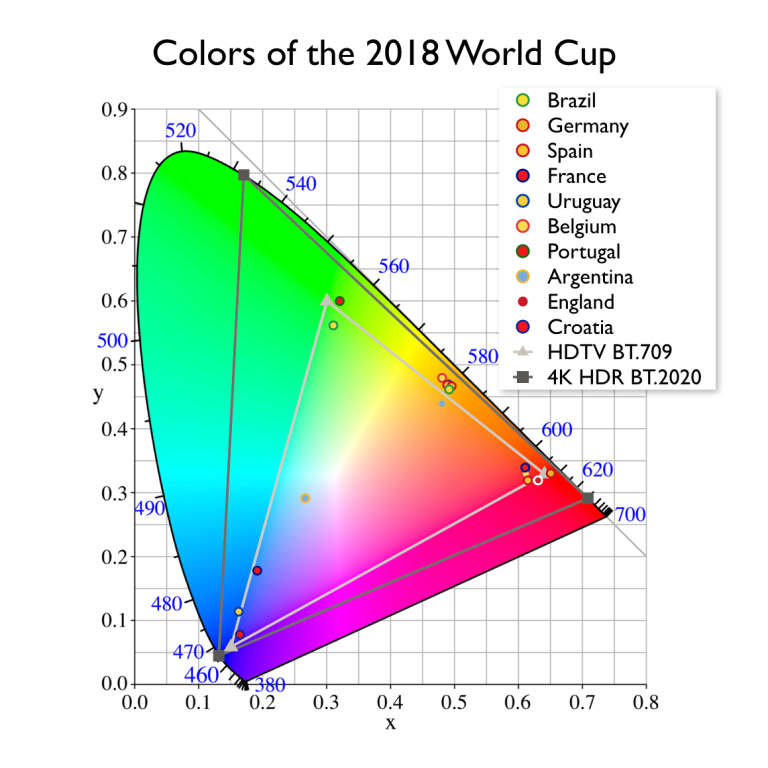 Yurek then compared the jersey colors he had measured to their on-screen renderings, and found that—sadly—most of the team’s colors fell outside of today’s standard HDTV color ranges (or “color gamuts”). This meant that most viewers around the world just weren’t experiencing the full intensity and range of color of the live World Cup 2018 on their TV screens.

But the display industry is already hard at work on new generations of display technologies that can deliver a more vivid and realistic viewing experience.

In the human eye there are three types of photoreceptors (cones) that affect our color discrimination. Each cone is sensitive to different, yet overlapping, wavelengths of light; the entire spectrum of light visible to humans falls between approximately 380 nanometers (nm) and 750 nm. Each cone in the human eye covers a part of this wavelength range (typically, the cones are associated with red, blue, and green wavelength ranges).

Cones of the human eye (labeled S, M, L because of their response to short, medium, and long wavelengths of light—ranges that generally cover blue, green, and red colors).

In 1931 the Commission Internationale de L’éclairage (CIE) defined a standard for scientifically quantifying the physical properties of colors, enabling accurate representation and reproduction of those colors. The CIE color space does not encompass all light—sunlight produces many wavelengths of light that are not visible, such as infra-red and ultra-violet—but is intended to describe all colors (all wavelengths of light) that are visible to the human eye. 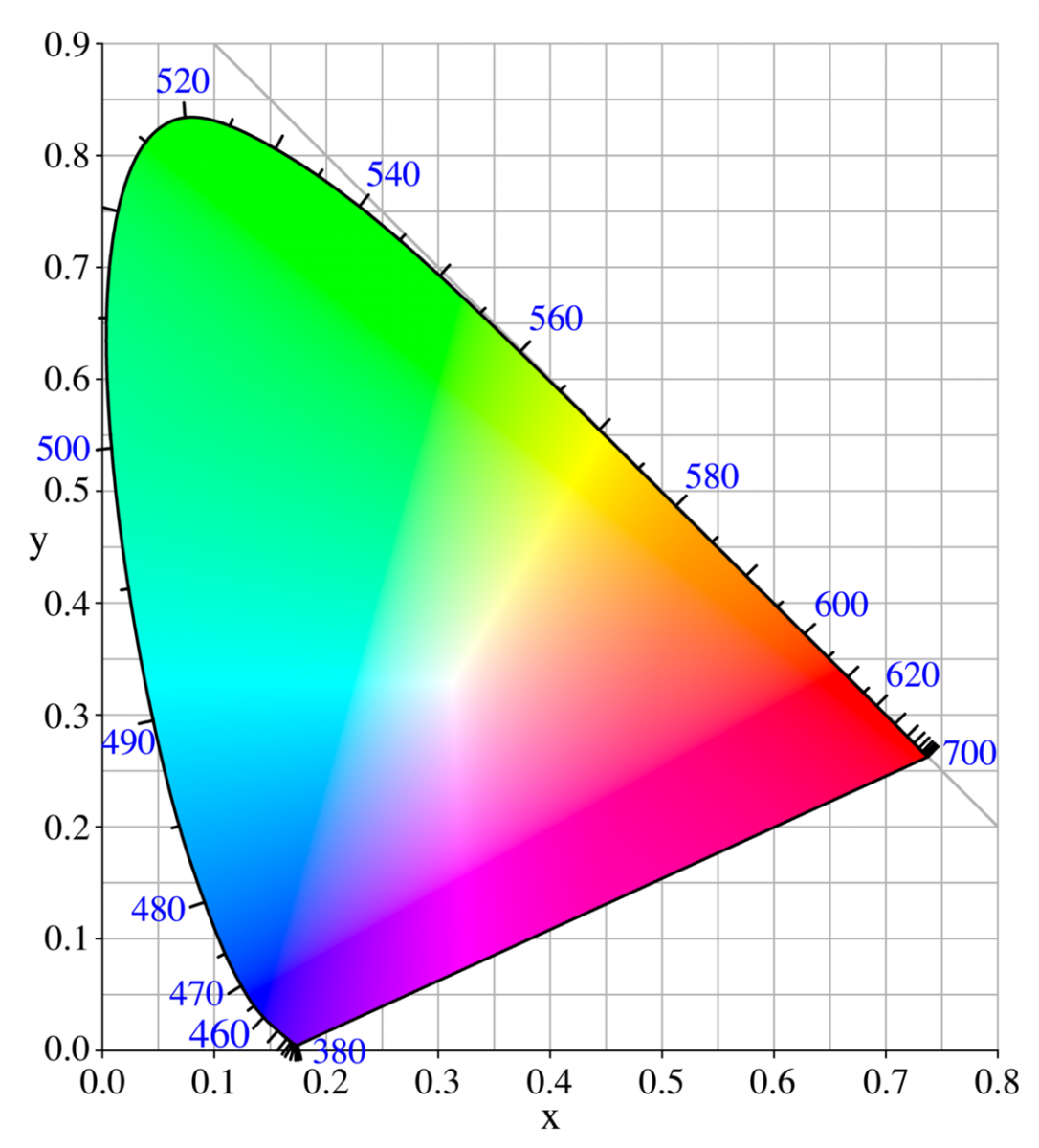 A graphical representation of the CIE 1931 color space, showing all colors visible to the human eye. The numbers in blue are the wavelengths of the light at each of the coordinate points (called Cx and Cy).1

A color gamut is the set of all colors available (producible) on a particular electronic device (a subset of the entire CIE color space). When a color is "out of gamut," it cannot be identically reproduced on the device. Up until now, the color gamut of any display screen has fallen far short of the full CIE color space, encompassing only a limited color set such as sRGB, Adobe RGB, and NTSC. (Learn more about these gamuts.)

For example, HDTVs have been around for quite some time, and while they provide a crisp and colorful viewing experience, they also represent only about one-third of the full array of colors on the CIE color space that the human eye can perceive. The color gamut of HDTVs encompasses a standard set of color values, the BT.709 gamut; this is also the range of values present in today’s standard TV broadcast transmissions. 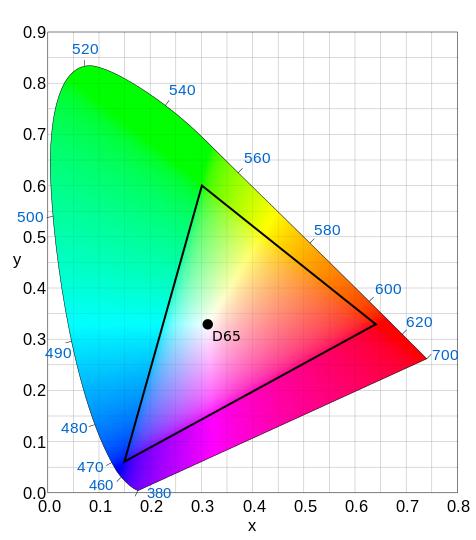 The black triangle shows the extent of the BT.709 color gamut. The D65 point is white light.2

To view a wider color gamut, you need a screen capable of displaying more colors (such as 4K HDR), a broadcast transmission that includes a larger number of color values (such as the HDR10 standard or DolbyVision), and content that was created in HDR to begin with. Learn more about HDR.

A much wider color gamut, the Rec.2020, is the target gamut for the next generation of so-called “super-hivision” or “ultra-HD” televisions. These include 4K HDR (high-dynamic-range) TV screens, which will be accompanied by a corresponding upgrade in broadcast transmissions. For those who are ahead of the curve and already own or are thinking of buying a 4K HDR television, wide-gamut transmissions are already available from some streaming providers. 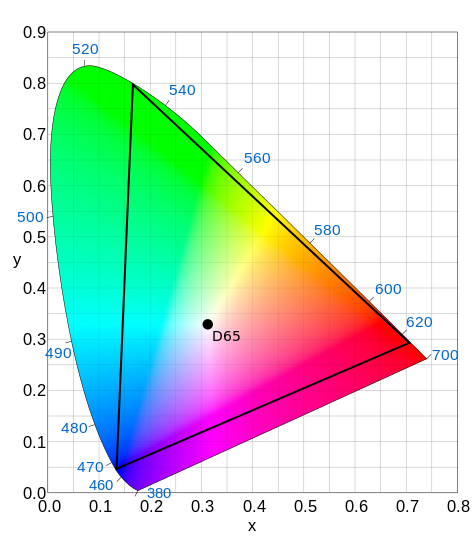 The black triangle shows the much larger Rec.2020 color gamut, which encompasses many more—although still not all—of the colors the human eye can see.2

The earliest television screens used cathode-ray-tube (CRT) displays, which were far less capable of exact color reproduction. Later in the early 2000s, liquid-crystal flat-panel displays reached the consumer market, followed by LEDs, both offering higher-resolution image reproduction and other benefits, but no significant improvement in color representation. In recent years, OLED (organic LED) screen technologies have been a focus of development in the display and consumer electronics industries. Not only do OLED displays have the capacity to show a richer panoply of colors, but also deeper blacks (because pixel emitters in the black areas of an image can be completely turned off), and higher resolution, all while using less energy.

One of the latest innovations in display color representation is quantum dots—microscopic particles just a few nanometers in size that are capable of emitting more pure colors (i.e., closer to the x,y points of the various color wavelengths ).

To ensure that these advanced television screens are providing the color, definition, and quality viewing experience that consumers are paying for, television manufacturers must do rigorous product testing. CCD-based colorimetric measurement systems have proven especially effective for measuring a wide array of light-emitting display devices including LED, LCD, OLED, microLED, quantum dots, and others found in consumer electronics devices such as cell phones, laptops, and televisions.

Radiant’s ProMetric imaging colorimeter solutions can measure and analyze screen performance at the pixel and sub-pixel level for absolute quality demanded by today’s high-definition (high-resolution) screens. Our CCD-based solutions can detect and correct quality issues like inaccurate or non-uniform brightness and color, as well as mura, dead pixels, and other defects. To learn more about the science of light and color measurement, watch our webinar on the basics. In it, we discuss: 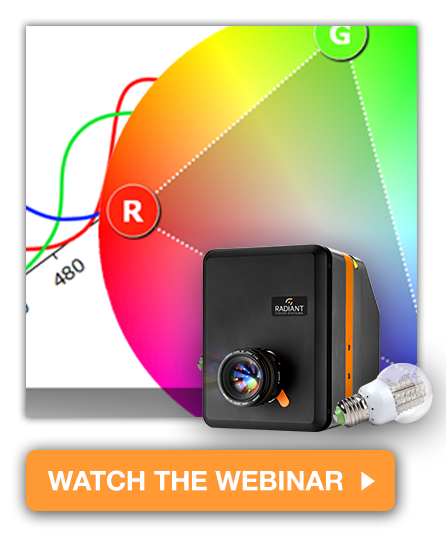 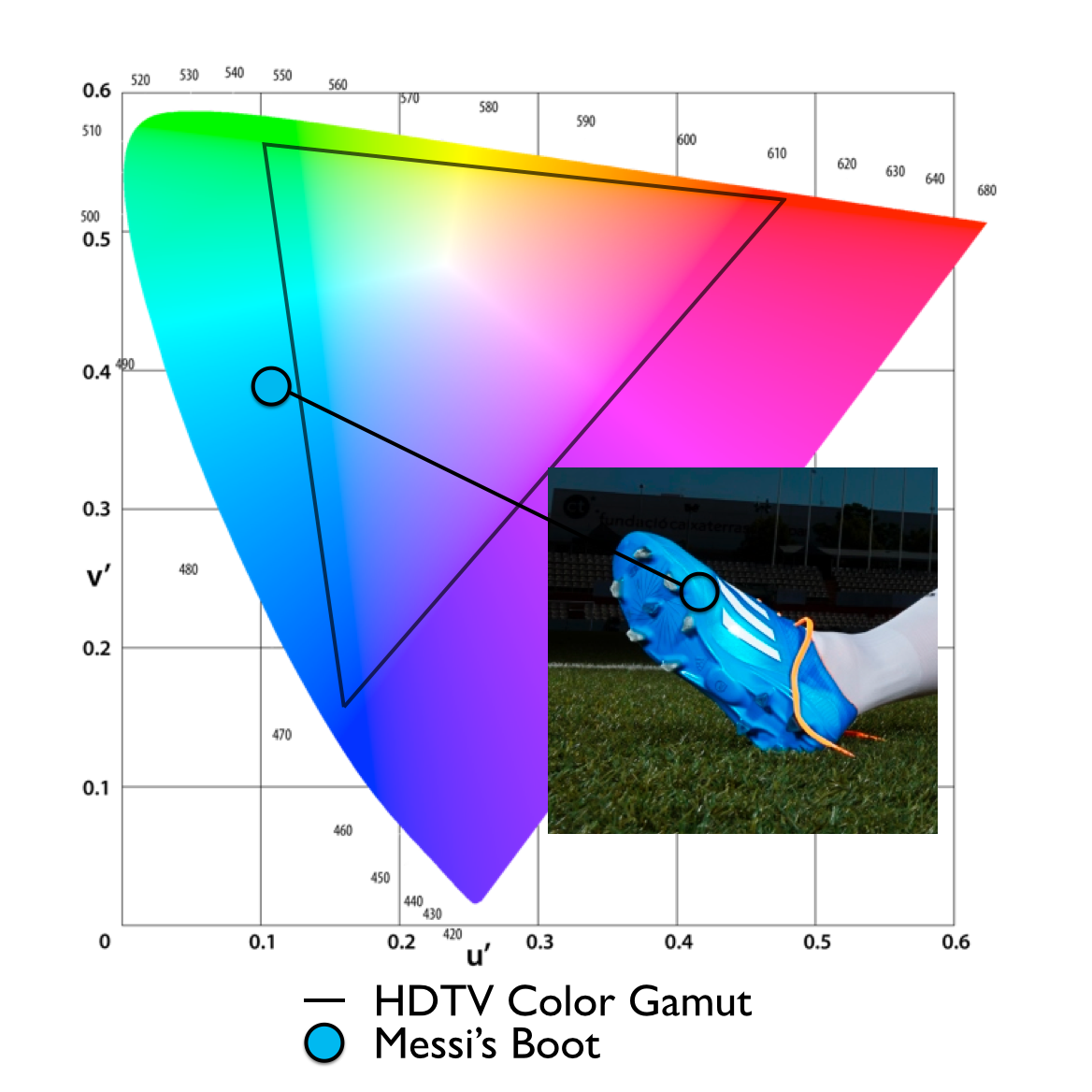 The triangle above illustrates the limits of HDTV in terms of the CIE 1976 color space. Lionel Messi’s blue cleats fall well outside that range, so the color you see on your TV is not accurate.1